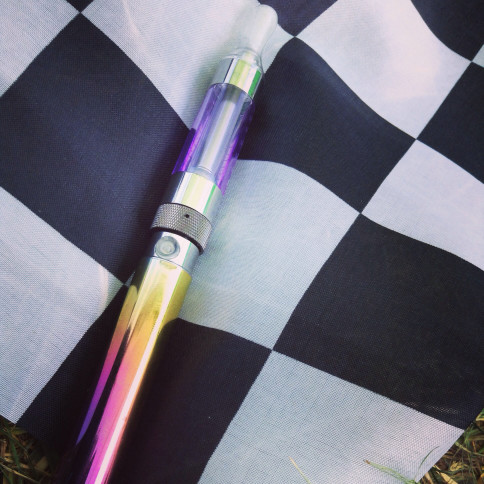 Yesterday, the Vancouver-based vaporizer company, Eagle Energy, began to roll out their caffeine vaporizers across Australia.

The product, – which is already being sold in gas stations, liquor stores and tobacco shops across North America – essentially works in the same way as an e-cigarette, but instead of delivering a nicotine hit, it provides anyone who takes a puff a caffeine buzz.

The skinny vape pen from Eagle Energy contains no nicotine, no sugar and, unlike a cup of Joe, no calories. Instead, its 3-ml liquid cartridge houses taurine, ginseng, Vitamin C, and flavorings.

The cartridge can last for about 500 puffs and 10-20 puffs are the equivalent of drinking a single serving of black coffee.

So why vape caffeine instead of downing coffee or guzzling energy drinks to perk you up?

For starters, the effects are fast acting. It can take roughly 40 minutes for caffeine to kick in once a person has ingested it, but a hit from an Eagle Energy vaporizer is almost instantaneous.

That’s because, like anything else anyone vapes, the caffeine enters the lungs and is absorbed into the bloodstream in a matter of seconds rather than minutes.

Some health experts are troubled by this, suggesting that there’s no way a person can tell whether they’ve had too much caffeine or not. There are worries (as there always seems to be with vaping) that if a person is vaping caffeine like they would nicotine, there’s potential to inhale too much which can result in a racing heart, upset stomach, a feeling of lightheadedness, the jitters or agitation. (Or as one doctor scarily put it, “much worse”).

“When you have coffee or an energy drink, your stomach feels full so you stop, but if you’re inhaling it, is there anything to stop you from ingesting too much caffeine?”

However – and this is where the second pro for using an Eagle Energy caffeine vaporizer comes in – vaping natural energy sources actually allows a person to have much more control over their daily caffeine intake.

“You can stop as soon as you feel more alert as opposed to drinking an energy drink and waiting for it to kick in.”

Eagle Energy founder Elliot Mashford also put forward that because the vaporizer does have such an immediate effect on the body, it will dissuade people from over-vaping.

“Likewise, the body metabolizes the caffeine at a faster rate via inhalation, making it virtually impossible to consume too much at once.”

So why else is vaping caffeine such an awesome way for anyone to start their day and keep them on their toes?

To find out, let’s apply everything that makes vaping any ingredient so great to the caffeine in an Eagle Energy vaporizer. It’s a healthier alternative to drinking coffee and caffeine drinks

– People add tobacco to their joints, nicotine to their e-liquids and sugar and milk to their coffee (not to mention the array of syrups and chocolate dust too).

Vaping eliminates all of those unnecessary bad things and even filters out things that are even worse, like carcinogens (yep, even these can be found in lattes and Monster).

The flavor is immense – Vaping always brings out the rich aromatic flavors of an ingredient and the same goes for the flavors in Eagle Energy’s vape pen.

Puffing on one tastes rather like drinking a Red Bull and Maxwell Strachan, Sports Editor of the Huffington Post wrote on Slack, four minutes after taking a puff, “If I die I’m going to die smoking vape pen because it tastes delicious.”

The Eagle Energy saves you money

– It’s been well documented that by switching from smoking/toking to vaping, people save themselves a lot of money. They stop needing to buy cigarettes and they don’t require the same amount of weed that they used to. That’s because vaporizers are so effective, they make their ingredients go a long way.

The same goes for vaping caffeine. A pack of three Eagle Energy vaporizers will set a person back $24.99.

Each one lasts for about 500 puffs. That’s approximately 75 cups of coffee. If someone was to buy 75 Tall Caffé Americanos from Starbucks (it contains roughly the same caffeine levels as 20 puffs from the Eagle Energy vape pen), they’d spend over $160.

The savings are incredible. Caffeine VaporizerThere’s also no trying to carry hot coffees in those rubbish paper fiber cups, no spillages to contend with and no wasting money when you realize you’ve let your coffee go cold.

The only downside that we can think of is that a person might not have the chance to use the vape pen at work (when caffeine is most needed), what with company policies and non-vapers getting offended, et cetera, et cetera.

Despite what critics have said, though, Eagle Energy are a successful, international company continuing to go from strength to strength. Their Indiegogo campaign was a resounding success and gained them a lot of fans.

With the help of 726 backers they raised the money they needed to create the handy sized 3-pack of Eagle Energy vape pens that are on sale today and they’ve also set up clinical trials in Northridge, California to explore, in more detail, the effects of inhaling organic botanicals, including guarana.

We can’t wait to see what the team at Eagle Energy come up with next.