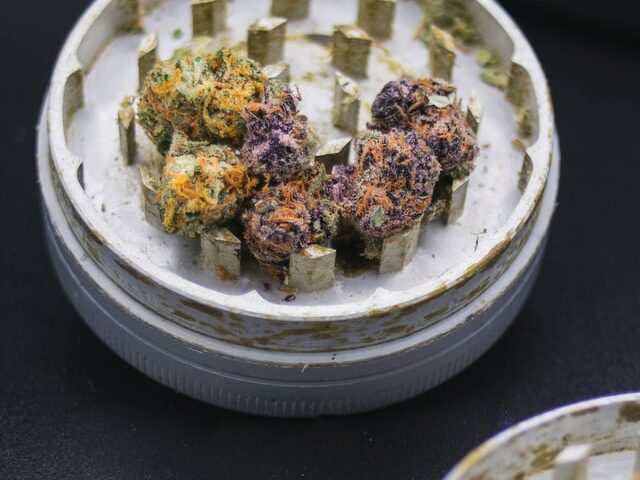 Despite the fact that the 4 piece models seem to be dominating the scene, there is still a substantial contingency of people who swear by their trusty 2 piece units, so let’s have a look at both types and discuss the similarities and distinctions that exist between them. 2 piece or 4 piece cannabis grinder?

If you are new into this and want to know more about grinders, check out our article about the benefits of cannabis grinders.

So, let’s just get this out of the way: the 2 piece grinder is straight up old school, but it still does an excellent job of grinding down vegetable matter, although with a bit more work than the modern day grinder. It will always be smaller and consequently more compact than its younger and much more complicated brother, since it only has one opening and two subsequent distinct components to cope with, while the younger and much more intricate brother has three openings and four subsequent separate parts.

On the opposite end of the scale, you’ve got technology, which is proudly displaying its intricacy with a 4-piece grinder set-up while sailing. The top lid and lower, inner grinding plate will be the first two elements of this sort of grinder to be assembled. To allow ground debris to escape from between the teeth of the lower grinding plate, tiny holes will always be present in the lower grinding plate, and directly underneath those holes will normally be a fine-wire mesh screen for capturing and retaining your grind.

Your third detachable piece will be a screen, and the specific reason it’s there is because all pollen that had previously been attached to your material has now been extra loosened by the preceding grind, and as a result, can now freely fall away down through the screen and into a lower storage chamber, which is the fourth and final piece of your grinder.

The more, the merrier?

Many would blindly jump in and say that it’s a no-brainer option based only on the features of the latter group of 4 piece grinders that are conspicuously absent from the earlier category of 2 piece versions. Of course, they would want more, more, more once they’ve made their pick. But allow me to pose a question to you.

Is simplicity the best strategy?

Allow me to explain. Assuming that you’ve purchased an amazing grinder that can be broken down into 4 pieces, and performs a variety of useful functions such as automatically exiting material from the chamber and collecting pollen, what happens if even one of the eight separate lines of threading becomes stripped or damaged?

The solution is straightforward. No action is taken since whatever component of the grinder has been damaged is no longer a functional component of the machine. Beyond that, what about the sheer size and weight of the object? When was the last time you saw someone attempt to cram a 4 piece grinding set into a pocket of their pants or even a jacket pocket?

If you haven’t already discovered it, I’ll save you the time and tell you that it’s a really entertaining and somewhat bizarre site. In fact, merely screwing and unscrewing the different components together on a 4 piece grinder may take more time than on a 2 piece grinder, making it more time consuming than 2 piece grinders in the long run. And what about the pollen sifter? If you don’t have some really high-quality material flowing through your grinder on a frequent basis, it won’t even be included in the calculations.

The two-piece set, on the other hand, is not without its own set of issues to overcome. When you put the incorrect sort of stuff in them, especially if it’s sticky like sap, it may be a complete pain to get them to work properly. Your hands will get coated with resin as a result of the -extremely- lengthy period it will take you to remove every last particle of ground matter.

They may be easier to hold in the hand, but they seldom have the butter-smooth movement and cutting force of a high-end 4 piece, however that is not to say that you can’t get fortunate with a two-piece at some point. If you do happen to deal in top shelf mixes on a regular basis, you’ll be losing out on a significant amount of strong pollen that will just pass you by and stay non-isolated, exactly as it does in nature. What’s the point of doing that?

Having exhaustively evaluated both versions to the ground and having a clean slate, let me just state that both a 2 piece and 4 piece grinder will serve the end user exceedingly well, and that they are preferable than simply using hands or scissors on their own by a factor of around twelve.

It all boils down to your own personal preferences in the end. Alternatively, do you like a more sophisticated and complicated set-up that may be onerous and overwhelming in nature at times, or do you prefer a more practical and straightforward design that sacrifices certain luxury elements in the process?

Only you can provide an answer to these concerns, and I really hope you do, since the one thing that cannot be contested is whether a grinder is a worthwhile investment. Knowing the difference between a 2 piece and a 4 piece grinder can help you choose the right size grinder for your needs. For more information, see our recent posts!